Which European Countries have identity cards with NFC?

One question we often get is which European countries have identity cards with NFC chips that ReadID can read. If you have one in your hand then checking if it has a NFC chip is easy: simply look for the ICAO chip logo.

This logo can also be found on ePassports and indicates an ICAO 9303-compliant NFC chip. ICAO 9303 is the UN’s international standard for passports and identity cards.

Background on identity cards in Europe

However, in August 2019 the EU decided to strengthen and standardise security features for identity cards from the different member states. Regulation (EU) 2019/1157 stipulates that all member states must follow the ICAO 9303 standards when issuing identity cards including an NFC chip with a face image inside. 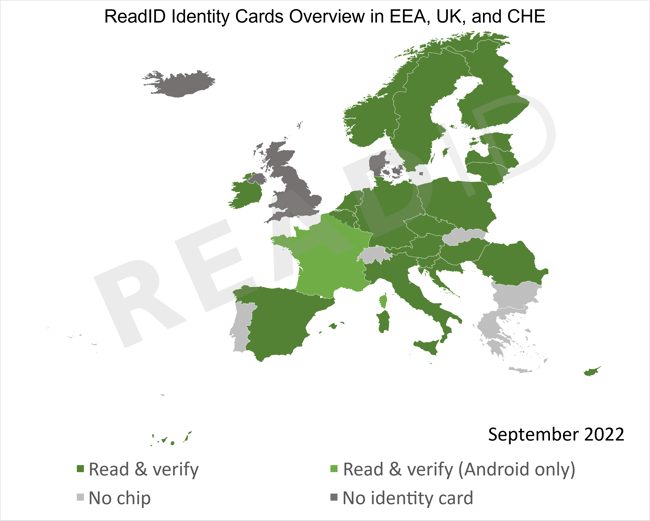 Which countries have identity cards are compatible with ReadID?

In August 2021, 28 out of the 32 countries (EEA, UK, and Switzerland) had identity cards with an ICAO-compliant Machine-Readable Zone. Among these 28, 21 also had an ICAO-compliant NFC chip. Identity cards are normally valid for 10 years. Some countries started issuing them less than 10 years ago, so they have both the compliant and non-compliant versions in circulation. These include Spain, Italy, Belgium, and Poland.

ReadID works with all ICAO-compliant identity cards in Europe. This means that ReadID can read the contactless chip of the identity cards from 21 countries, verify their authenticity, and check for clones. The map below shows which countries:

How did we create the map?

There is no authoritative source of all identity documents worldwide, and certainly not a publicly available one that contains details on the contactless chip implementation. We combined knowledge from public sources, non-public sources, our own testing data and ReadID Analytics data to make this overview. ReadID Analytics contains anonymous logging information that we use to improve ReadID, including chip characteristics and whether or not an MRZ scan or NFC read was successful.

We provide this overview as-is, without any form of guarantee. We appreciate it if you let us know if you notice mistakes or outdated information via documents@innovalor.nl.

If you’d like access to a list of countries and some more details, then we have a summary available that you can download. We also have a more detailed whitepaper, for our customers and partners.